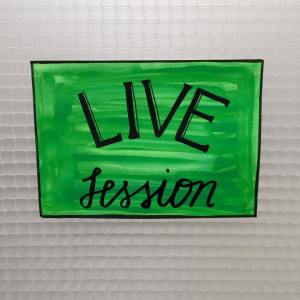 Do you know what a MOOC is? I haven’t either until last week, when I became part of a MOOC without knowing that it’s a massive open online course. Together with about 50 other people, we watched U.Lab live sessions at ImpactHub Berlin.

Not that massive? Over 35’000 people were streaming, learning and setting an intention together worldwide.

At KaosPilots, we’ve worked a fair bit with Theory U during Process Semester, so I was curious to learn more about it. Expecting to go deeper, experience, discuss, exchange and learn more about presencing and Theory U and meeting people with similar fields of interest, I went to Impact Hub Berlin.

But I wasn’t prepared for what I’ve found.

A room full of people willing to join the course. The basic idea is simple, beautiful and based on a lot of scientific research: 1. something old needs to end or die, then 2. the void needs to be met with an open mind, will and heart to 3. allow something new to be born. Each of these stages from ending to void to newness can be opened up and has multiple layers to it. There’s amazingly detailed material on Presencing Institute’s website and even this beautiful graphic recording:

So our group, too, went through these stages to sense what needs to end and what wants to emerge. Thanks to social media it was possible for Otto Scharmer and his crew to create word clouds based on twitter posts. Through #ulab #endings, participants were sharing what they felt was ending right now. The shocking majority twittered about a dying world. Our collective home as humans. A. Dying. World. 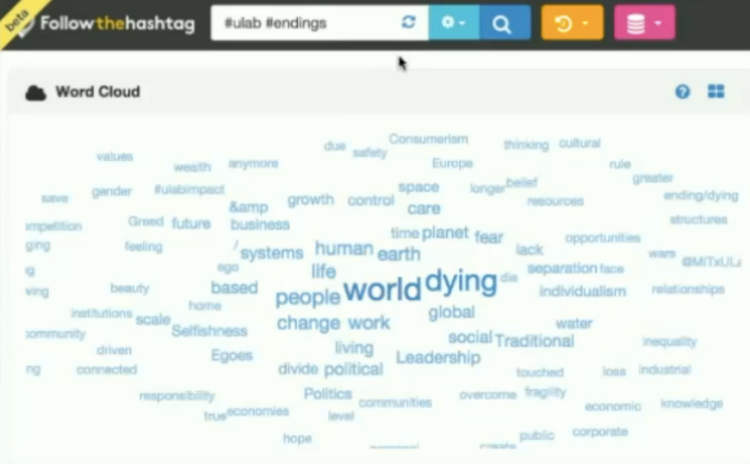 Even Otto Scharmer was obviously shocked by this result.

What to do with it? We could become cynical in the face of wars, climate change, natural disasters, posioning of earth, air and water, massive injustice, poverty, hunger, higher CO2-emissions caused by factory farming than global transportation, factory farming itself, overfishing of the seas, food scandals, plastic pollution, dirt cheap fashion, fracking and so on. We could decide to keep the self small by thinking „oh it’s just me, I can’t change anything anyway, so why bother.“

Or we could decide to tune in, become more alert and actively create visions of another world we truly want to live in.

Daring to stay in the void and listening deeply to what wants to emerge is no small thing and can feel very uncomfortable. However, for every ending there is a new beginning. Allowing to feel uncertainty in this in between state is the basis for presencing what wants to come instead of re-creating old structures for the sake of filling the empty space.

Through meditation, we entered a collective place of stillness and shared what wants to emerge. Possible beginnings have been twittered and captured again by a word cloud (here in 3 different updates):

What if we consider death not as ultimate ending but as point of transition?

Could facing this critical moment in time and its pressing issues (ecological, social and spiritual divide) ultimately be our chance to evolve as collective? This process may sound overwhelming, unlikely or even absurd, yet it starts with one simple thing: setting an intention. 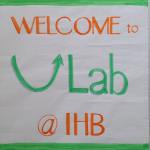 If you want to go deeper and don’t find such a group near you, maybe this is the time to start one yourself.

Love thinking with my hands. And beyond. Mehr Beiträge anzeigen